Hello everyone, This is Yana Smakula here at Spellbinders and thank you for joining me!

Today I’m going to show you how to create Underwater Birthday Party card. I’ll share 3 different card layout ideas using the same supplies. Keep in mind you can also turn any of those projects into a shaker by adding a layer of acetate and some sequins or beads in front of the window area to shake inside the card and make it interactive. Hover over the image below to see what I used in creating this card: 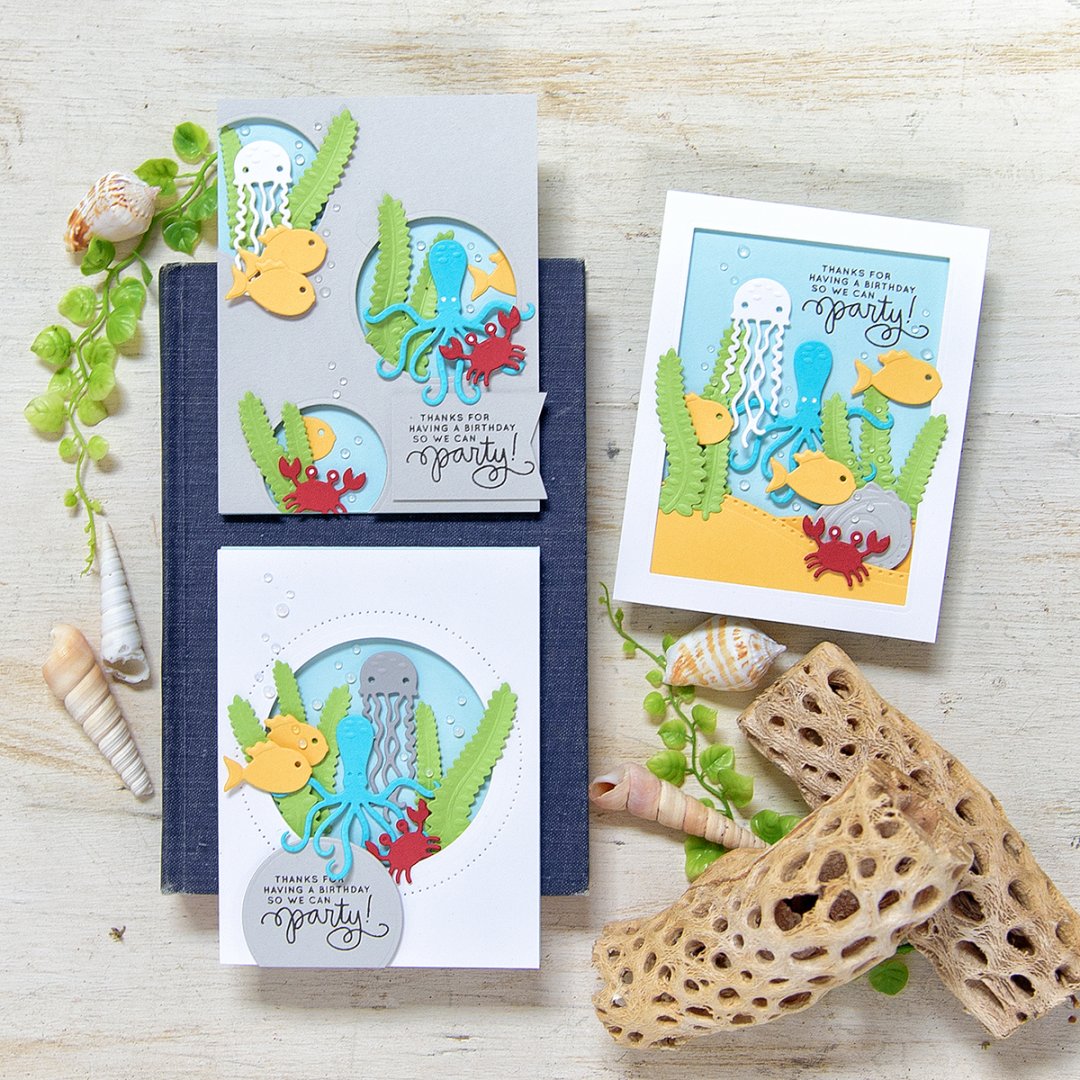 You’ll notice that one of my cards uses a light gray cardstock for the front panel and others use white. Both looks great – don’t feel like you have to go with white, look for other colors of paper you can try.

I mainly used dies from the Sea Animals set, but I also added some underwater ferns from the Sea Life set. I think its important to add some greenery to the scene to make it a bit more realistic. You can also use dies from the Sea Shells set to die cut a few additional elements for your projects.

I die-cut Jellyfish out of gray and white, you can also cut it out of vellum so that it would be a bit see through. Make sure to add embossing to your die cuts, especially the octopus – it adds some really cool texture to this die cut and it just doesn’t look the same without it.

If you’d like you can add some fun accents like air bubbles using glossy accents, clear droplets or Nuvo Drops. I used Nuvo Drops in Morning Dew and added a bunch of bubbles here and there. This particular color of Nuvo drops dries clear and it ends up being a lot more dimensional than glossy accents so I love using it for things like this. You can also adhere little beads or droplets or even enamel dots. Another idea is to die cut tiny circles out of white cardstock and adhere those.

Watch my video tutorial to learn how you can make these cards:

Thank you so much for stopping by today, have fun stamping!

October 2020 Large Die of the Month is Here – Always Welcome

Raise your 🙋‍♀️if you can't wait to see o

Ready for some sneak peaks? 😆We are so excited

Join us every Friday at 10 am MST for Spellbinders

And last, but certainly not least, meet The Neutra

It warms our hearts to see your excitement around

Now this time you do have to pick a favorite one -

Next up we have Barely Peach, Terra Cotta, and Per

We are bursting with excitement - our Color Essent

Always take the scenic route ❤. We love this dai