Hello there, everyone! This is Hussena, from Quill and Punch Works. I am absolutely thrilled and honored to be guest designing for Spellbinders today! I have three cards to share that showcase the 3D Holiday Vignettes and Glistening Holiday Glimmer by Becca Feeken.

3D Holiday Vignettes Collection brings the holiday spirit to life with layers and dimension to make your projects special. This collection can be mix and matched with the Shadowbox and 3D Vignette Collections for more elegant designing options. 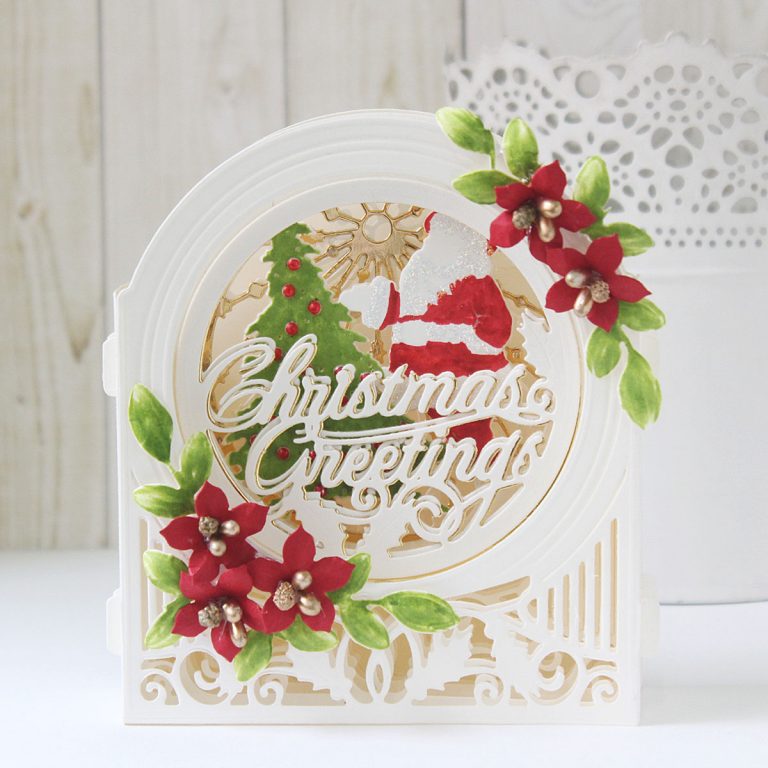 To create this card, I die cut the outer frame, the inlay pattern and the side panel frame dies, all from the Grand Snow Globe Etched Dies from Cream Cardstock. I wanted to create a festive scene on my card, so I went ahead and also die cut the circle frame with the image of Santa Claus and the circle inserts from the Santa Claus Layering Set Etched Dies from White Cardstock and Gold Mirror Cardstock respectively. I colored the Santa Claus die cut pieces and the tree using a mix of Alcohol Markers & Zig Clean Clear Brush Markers. I added some Crystal Clear Glitter to add some shimmer to the beard, gloves, and belt, for added interest! I also added red pearls to the Christmas tree. 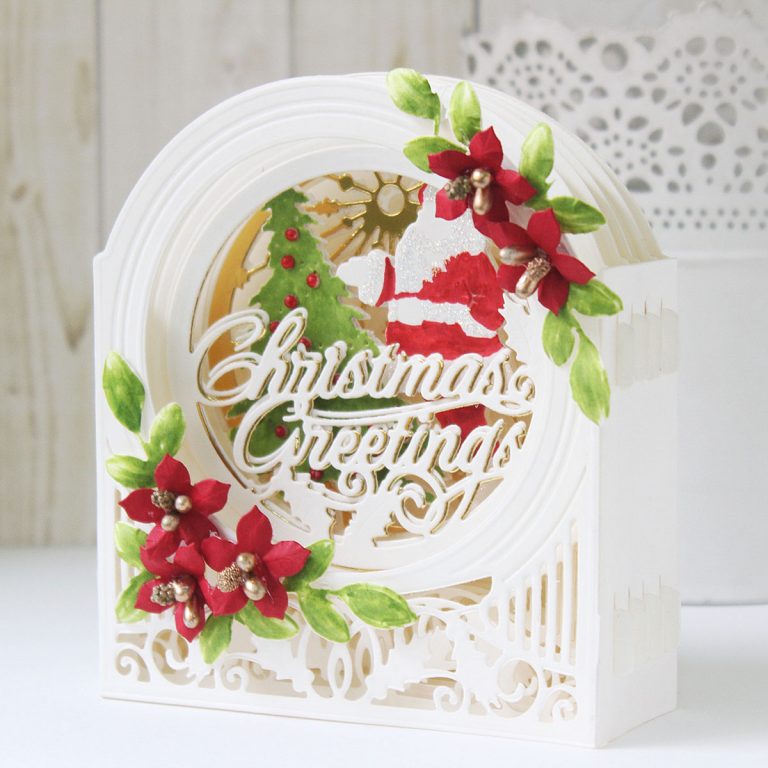 It was time to assemble all the panels together. I wanted the sentiment to be one of the main design elements of my card, so I die cut it and adhered it to the front of the card panel instead of adding it to the panel inside. I die cut it twice, once from White Cardstock, and once from Gold Mirror Cardstock, so that it would give the effect of a shadow. I die cut them using the sentiment frame insert die from the Grand Snow Globe Etched Dies. I also die cut some poinsettias from the same die set using Red Cardstock. The leaves are from an older die set by Becca, and I die cut them from White Cardstock and colored them using Alcohol Markers. I also added some gold pollens for the poinsettia centers to give them a fuller look. 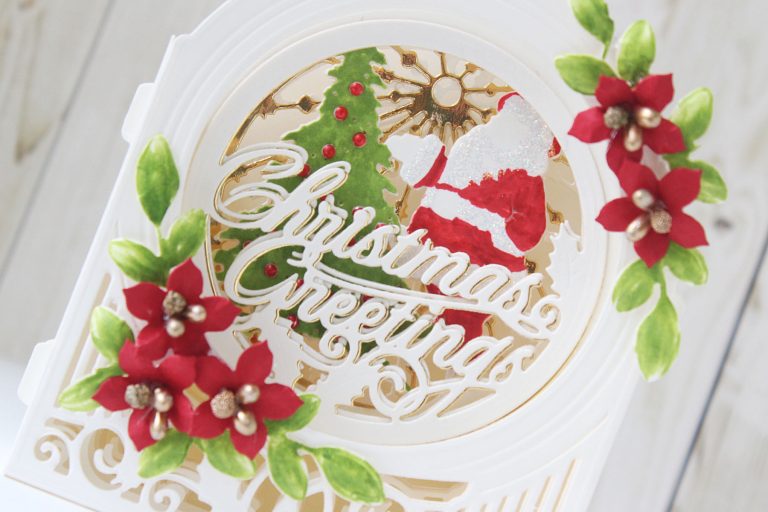 Here’s a picture showing you the overall dimension. The best part about these 3D Holiday Vignettes, is that they can be folded flat for mailing. Isn’t that so cool?! 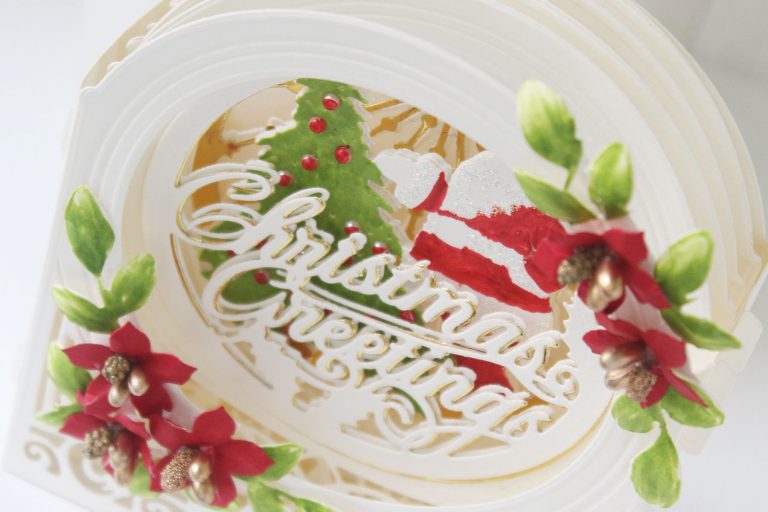 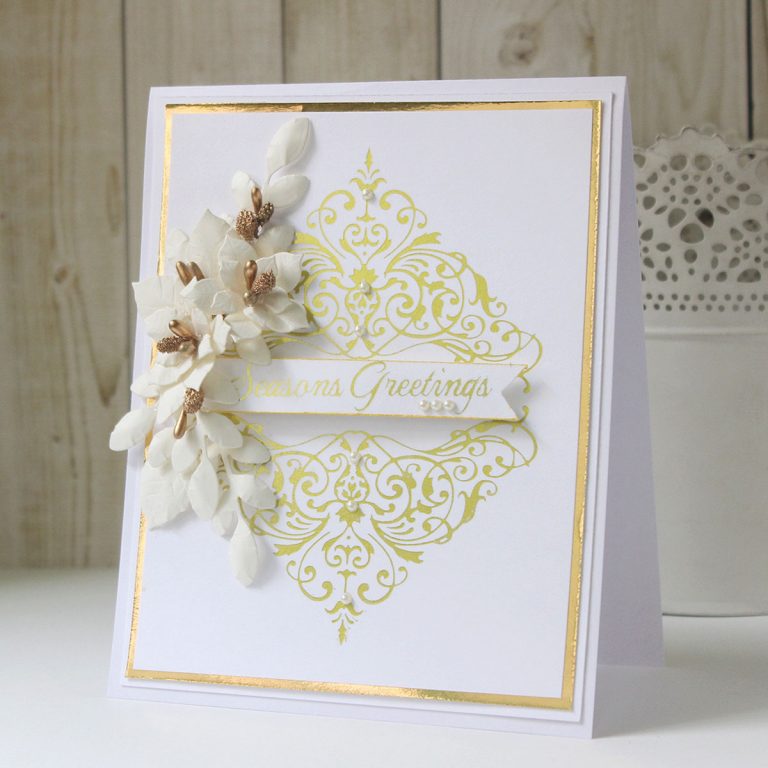 I used the ‘Seasons Greetings’ Glimmer Plate included in the Christmas Damask Jubilee Glimmer Hot Foil Plate for the sentiment. Next, I die cut a fishtail banner and inked the edges using FSJ Gold Pigment Ink. I added three pearls on the banner for added interest. At this point, the card felt a little too CAS for my taste, so I went ahead and die cut a bunch of poinsettias using the Cinch and Go Poinsettia Etched Dies Etched Dies from Cream Cardstock. I embossed the petals and added gold pollens in the centers. The leaves are die cut from the Cinch and Go Flowers III Etched Dies. 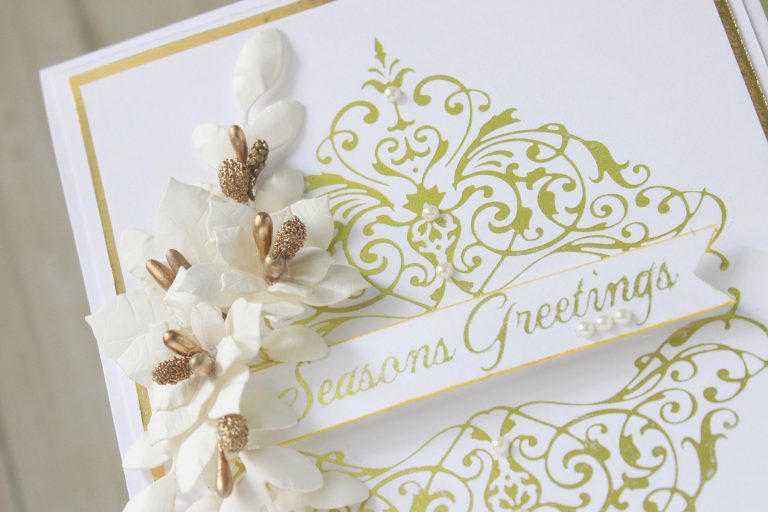 I love this damask design and can’t wait to use it for some more projects! 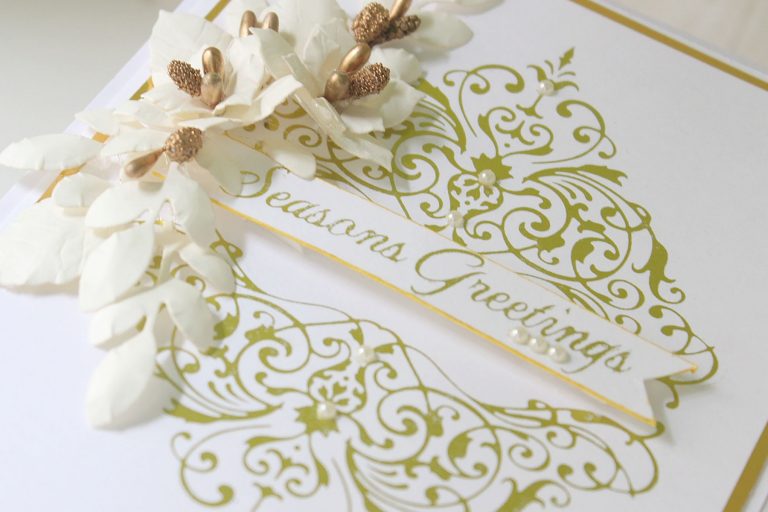 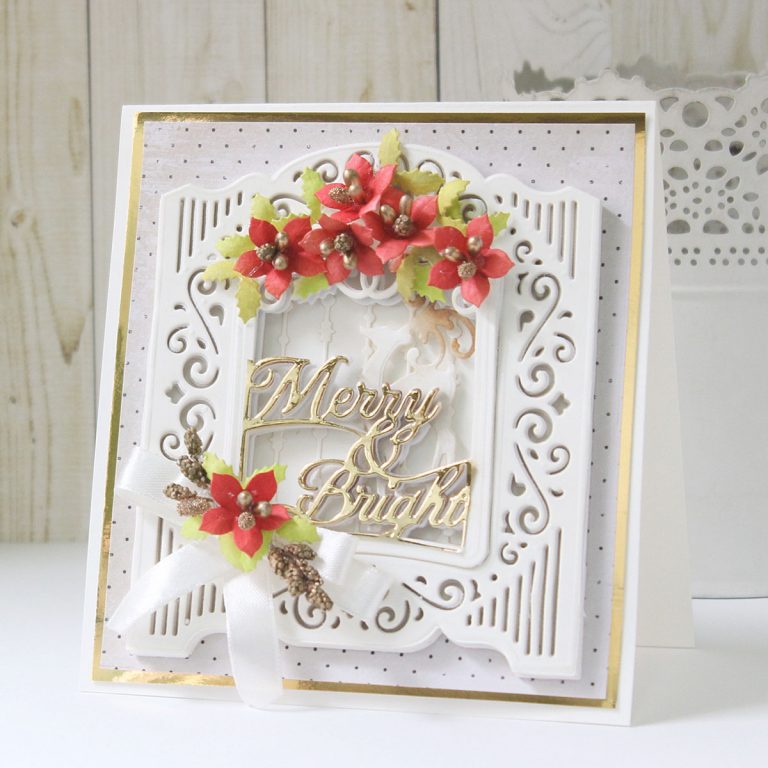 This card has loads of layering which is one of my favorite styles of card making. To start with, I die cut the Grand Holiday Cabinet Etched Dies twice from White Cardstock and then again from White Fun Foam. I did this so that I could adhere the cardstock die cut panels over the Fun Foam to get a raised effect on my card. 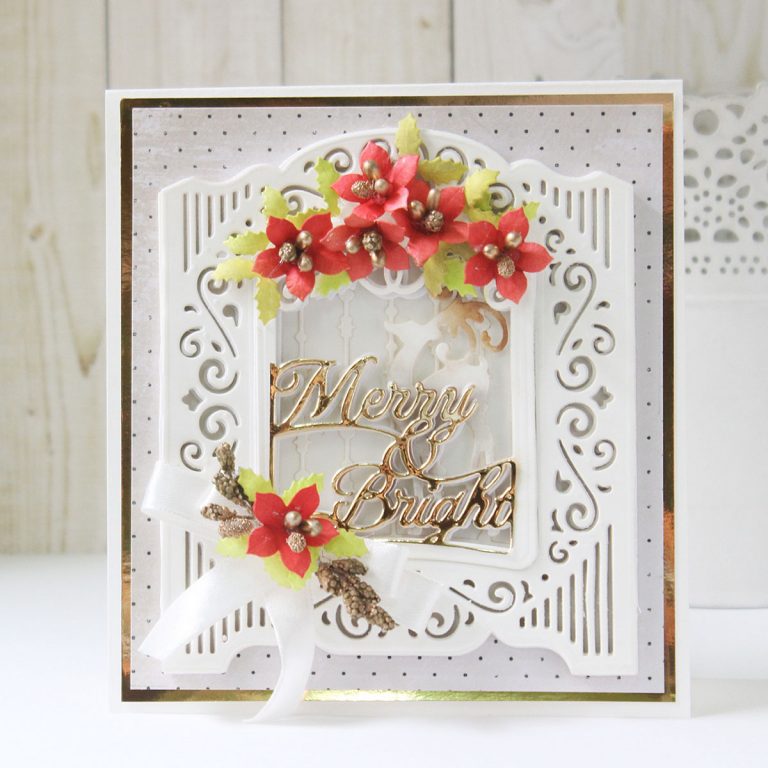 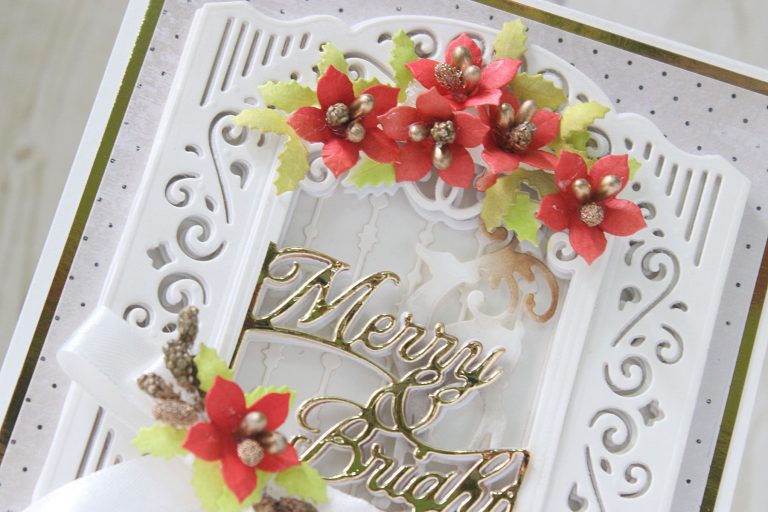 The poinsettias were created using the poinsettia die included in the Grand Snow Globe Etched Dies. I die cut them from White Cardstock, colored them using Distress inks, embossed the petals and added gold pollens for the centers. The holly leaves are also from the same die set. I die cut them from White Cardstock as well and colored them lightly using Distress inks. Finally, I added a White Satin bow and placed a poinsettia and holly leaves as the finishing touch. 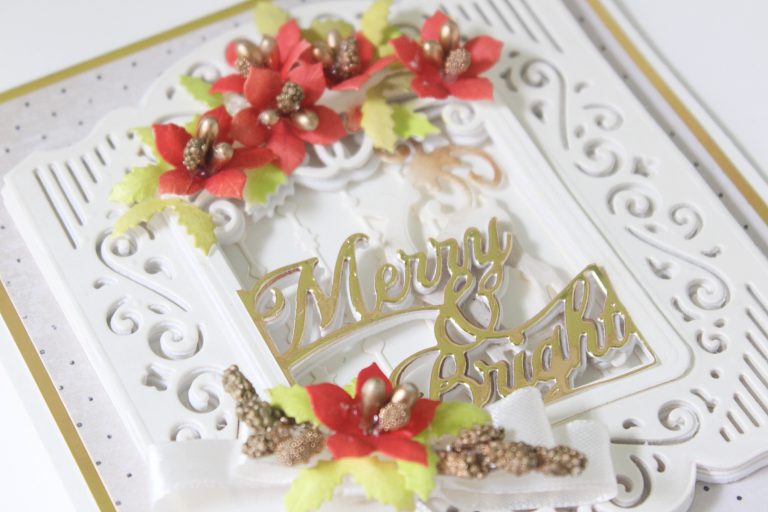 I hope you liked the cards I shared today. I had so much playing with die sets from the 3D Holiday Vignettes by Becca Feeken. I can’t wait to make some more projects using them!

Thank you so much for visiting! If you would like to see more of my work using Spellbinders dies, do visit my blog and follow my Instagram page.
Have an amazing day!

'Hello! My name is Hussena, and I live in Kolkata, India. I am a stay at home mum of two kids and have been crafting for over five years now. I started my creative journey with paper quilling and since then have dabbled in various paper crafting forms like punch craft, die cutting, and more recently stamping. I am an ardent floral fan and you will find me using florals on almost all my creations. I love working with dies, especially floral and intricate ones, as they offer me various possibilities. I also love to create my own handmade flowers, and this is one of the reasons why I am drawn to Spellbinders dies. You can find my work on my blog: Quill and Punch Works

May Peace Be With You 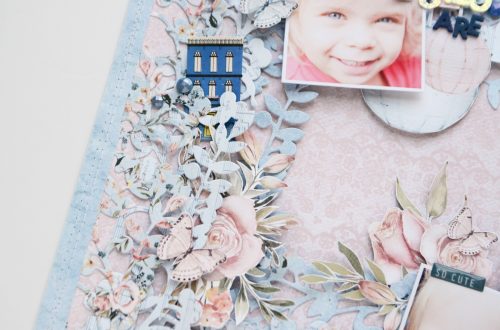 Are you looking to add fresh sentiments to your Ho

Our Glimmer Winter Village Glimmer Set from the Ya

We love this beautiful sympathy card by @mysherica

🌈 Don't you just love our rainbow foil? 🌈 We

You can have your cake and eat it too! 🍰 Yummy

We adore these floral frame cards by @zsoka_marko

Do you like to use patterned papers, stickers, die

Becca has cleverly designed her take on the waterf