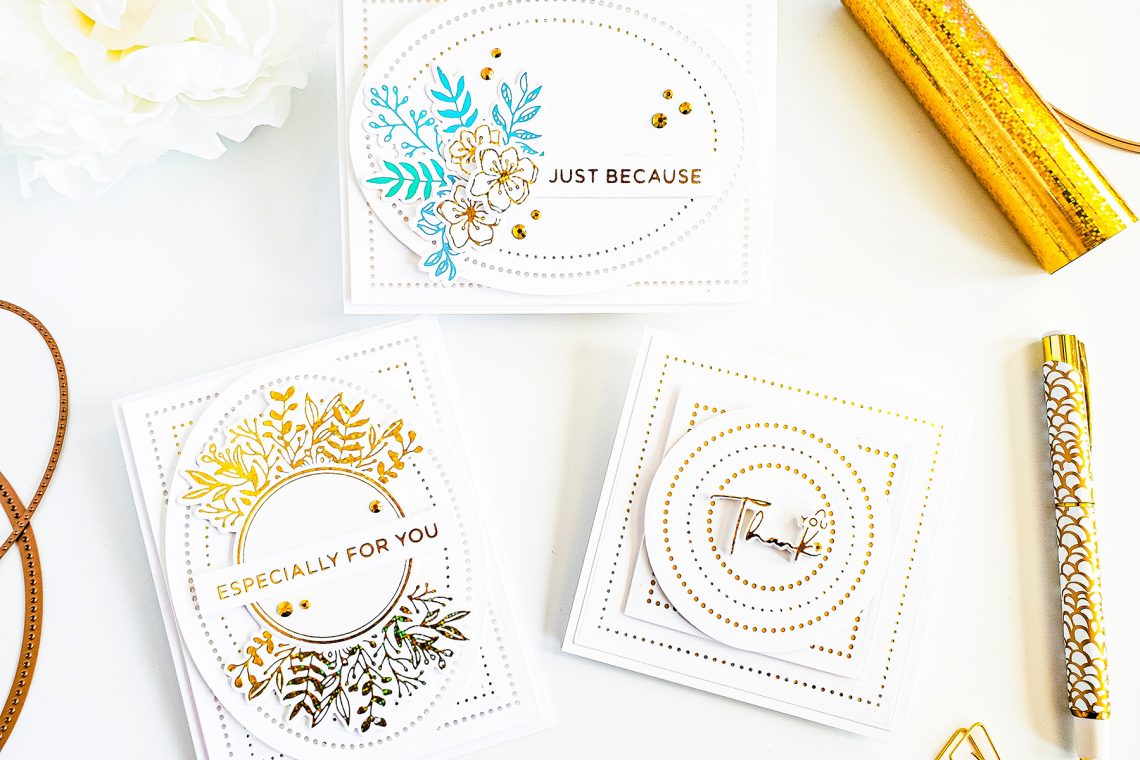 Hello, Spellbinders’ and FSJ friends! Yasmin here sharing with you 3-Inspiration Cards featuring the new; Modern Essentials Collection. Honestly, this is a collection that every crafters must have in their collection as, not only add the Essential Etched Dies add beautiful create an intricate dotted edges but, also works perfectly with the new; Essential Glimmer Hot Foil Plates which add that perfect and elegant foiled accent on your cards. So, without further ado, let’s jump to the step by step on how to make them. 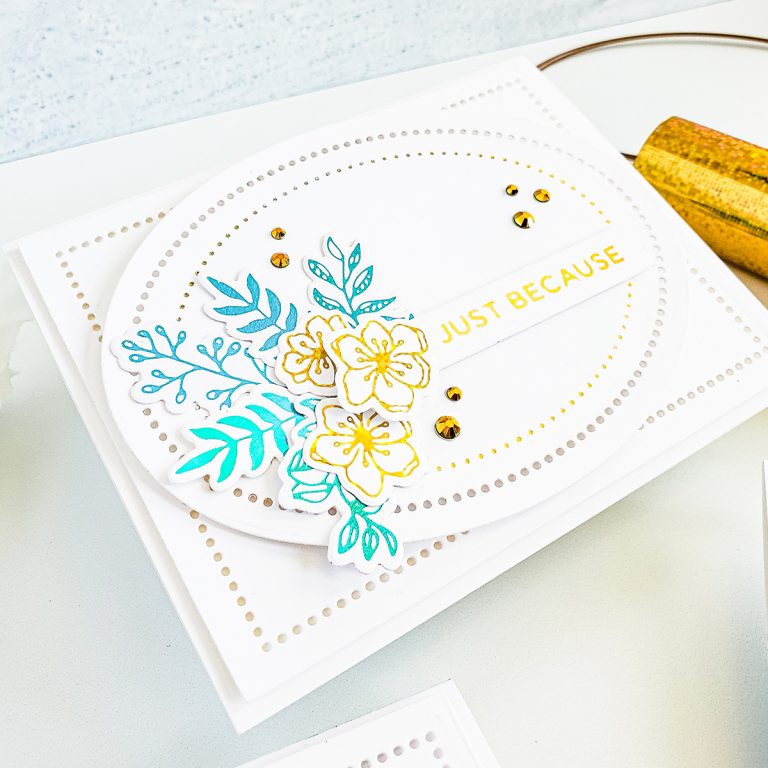 To begin with, I started by turning on the Glimmer Hot Foil System Platform. While the platform was heating up, I lined up over an A2 size white card panel the first 2 largest rectangles from the; Nestabilities Essential Rectangles Etched Dies set. You might be wondering why 2? So, let me explain you, the set comes with 8 dies which means that, 4 are meant for die-cutting while the other 4 are meant to add the intricate dotted edges. That being said, after I the dies line up, I ran them through my Platinum 6 Die Cutting and Embossing Machine along the white card panel. 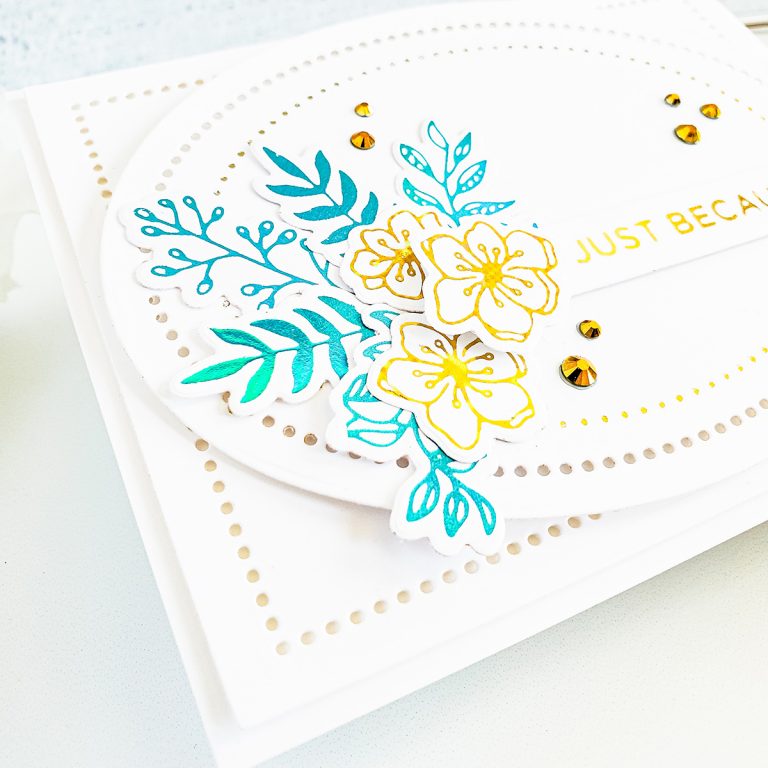 After, I was done die-cutting the first card panel, I foam mounted it to an A2 top folding white card base and I set it aside. Meanwhile, I lined up over an A2 size white card panel the first 2 largest Ovals from the; Nestabilities Essential Ovals Etched Dies just as I did for the first panel to create the oval panel. Once, I had the oval die-cutting panel done, I lined up over it the second-to-last oval hot foil plate from the; Essential Glimmer Ovals Hot Foil Plates. Once, I had it lined up, I created a hinge with low-tack tape (Yana’s Technique) to secure the plate in place. Then, I cut with a sharp scissor a piece larger enough to cover the oval plate out of the Hot Foil Roll – Speckled Aura included in the; Glimmer Hot Foil 4 Rolls – Spellbound Variety Pack. Once, I had the piece I placed it in place, and I moved on to transfer the foil following the settings from the Glimmer Hot Foil Platform and Platinum 6 Die-cutting Machine to add the foil accents to the oval. 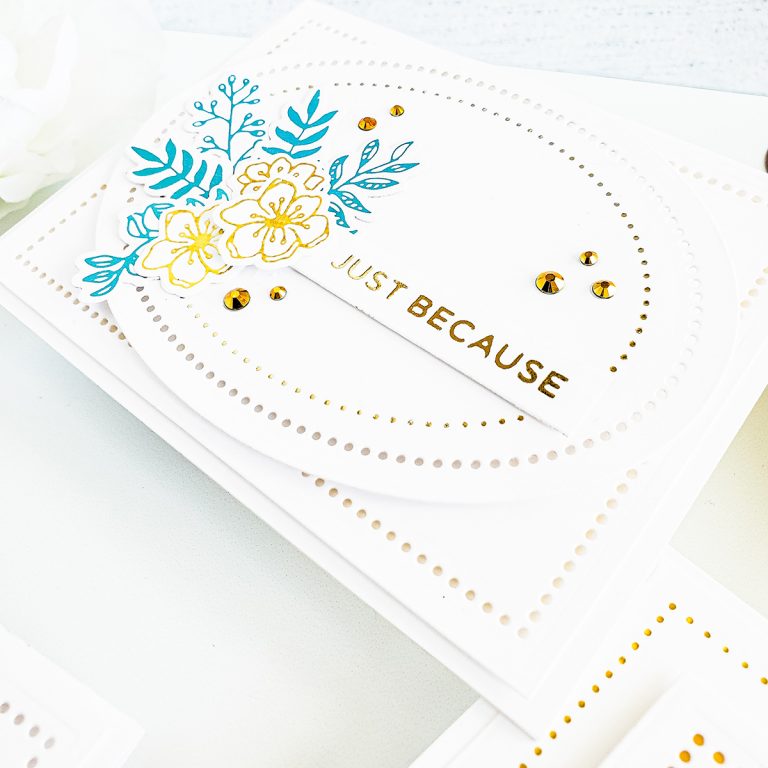 Rectangle/oval Especially for You With 2 Foil Accents Card 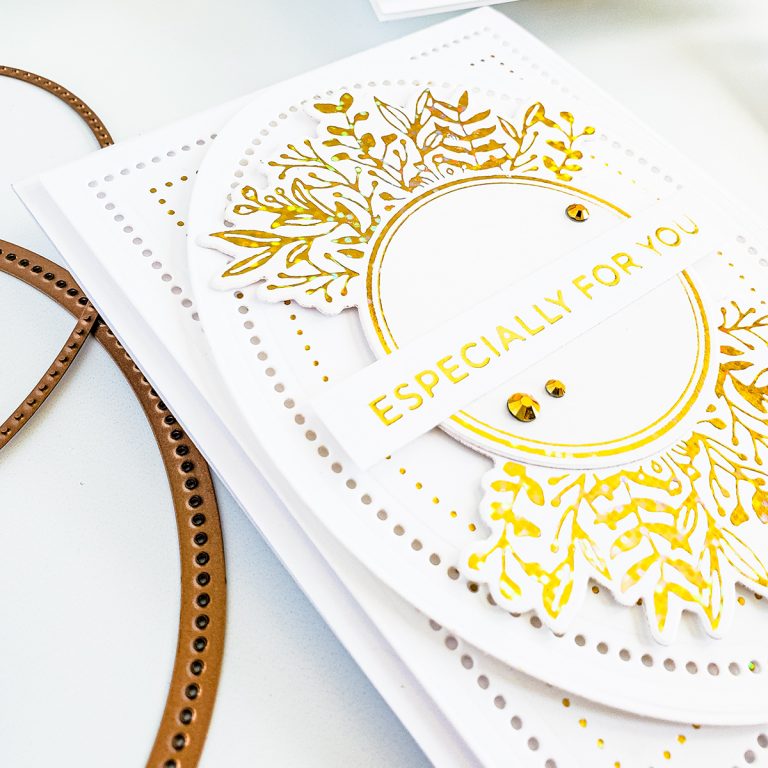 For the second inspiration, I’ll start by skipping the explanation for the die-cutting process as, is basically the same as the first inspiration card. However, if you see closely in the image above you won’t only notice that, I have added a second foil accent by using the second-to-last plate from the Essential Glimmer Rectangles Hot Foil Plates.

So, once both foliage borders were foiled, I ran them through the die-cutting machine, and I stacked them both as shown above leaving the one with the foiled circle on top. Lastly, I foam mounted the stacked foliage to the card and I finish the card by adhering one of the 3 sentiments that I have foiled on white cardstock using the More Sentiments Glimmer Hot Foil Plates. 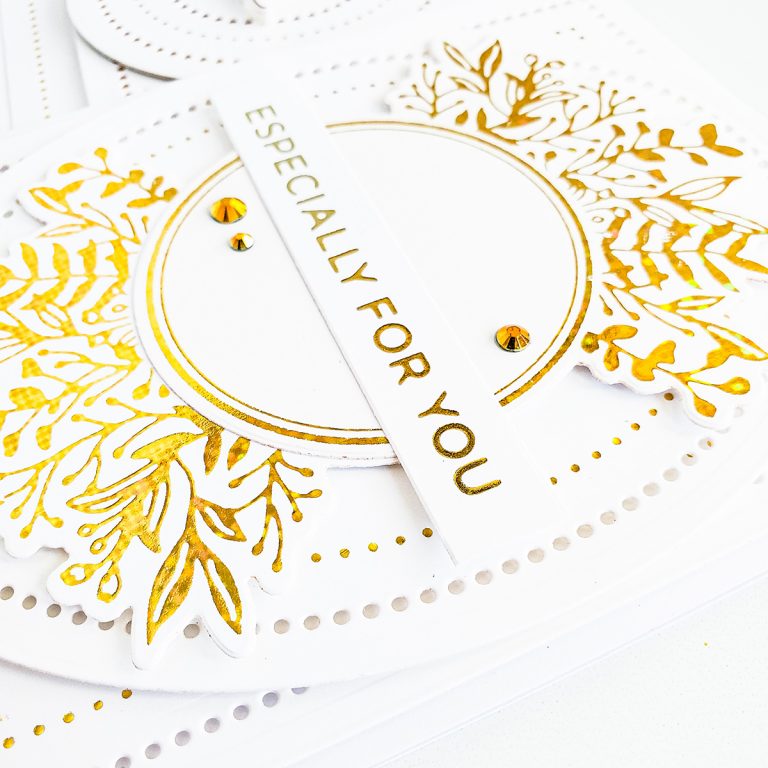 I hope this image explains better what I mean with 1 and 2 foil accents as, you can go so on and so forth not only adding layers but, also foiling all 7 plates in one card panel or you can line up the intricate dotted edges for a one layer look. Possibilities are endless with these sets.

Square/circle Thank You With Foil and Gold Cardstock Accents Card 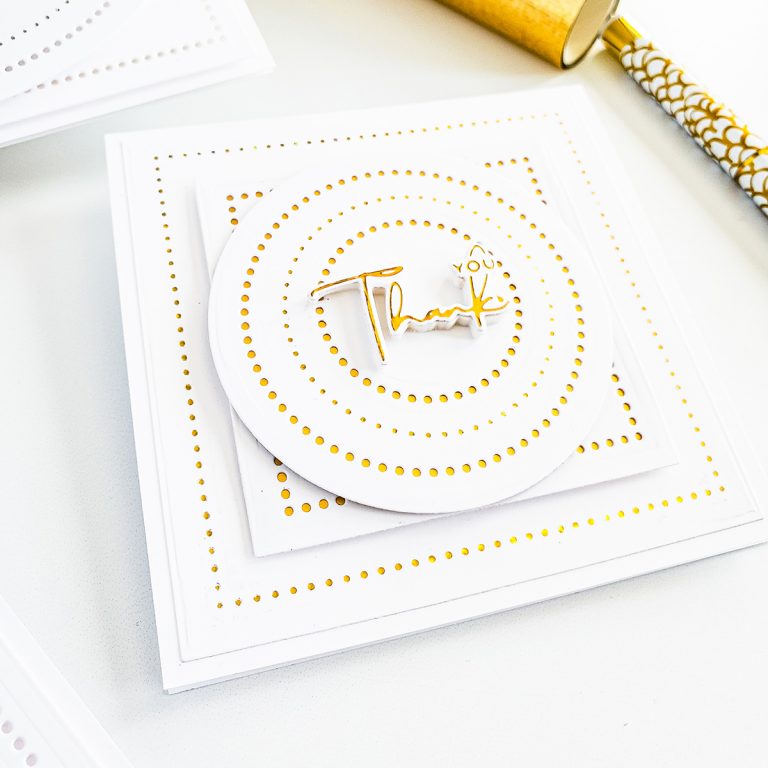 For the third and last inspiration, I kept it simple by skipping flowers and leaves thus, I added more details for you to see what I meant in the previous example. So, for this example, I ran through the die-cutting machine a white card panel along with the largest die from the; Nestabilities Essential Squares Etched Dies. Next, I skipped the intricate dotted edges, and I went straight forward to add the accent foil by using the largest plate from the; Essential Glimmer Squares Hot Foil Plates. Once, I had the foil accents added to the square card panel, I adhered it with double-sided tape to a 4 1/4’’ x 4 1/4’’in card base. 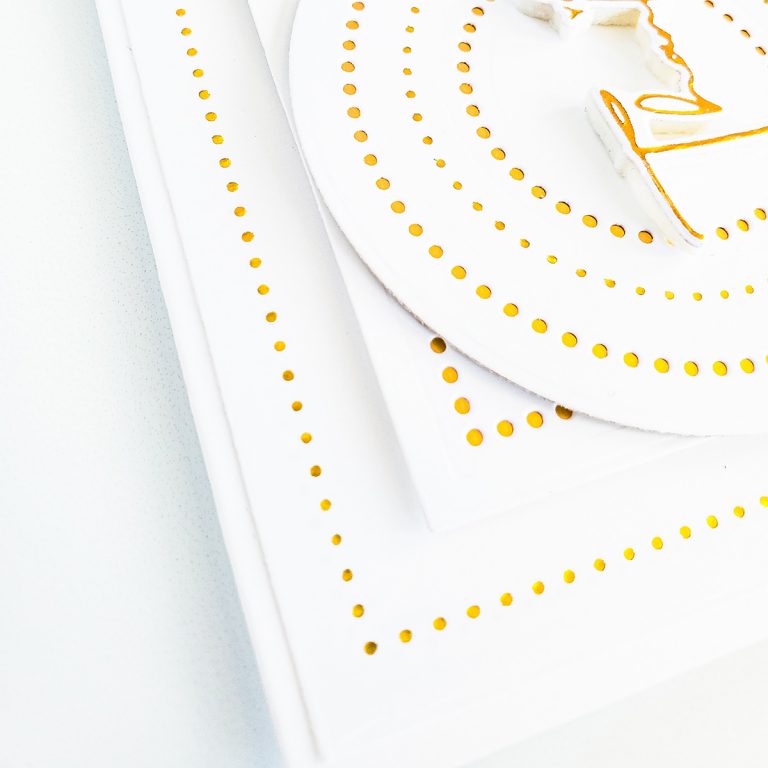 Then, I lined up the fifth and sixth-to-last dies from the; Nestabilities Essential Squares Etched Dies to create a second detailed square die-cutting. Once, I had that done, I removed the intricate dotted edges die, and I ran once again the other square die to die-cut it this time out of gold cardstock this time. Lastly, when both square die-cutting were done, I stacked them both and I foam mounted them to the card. 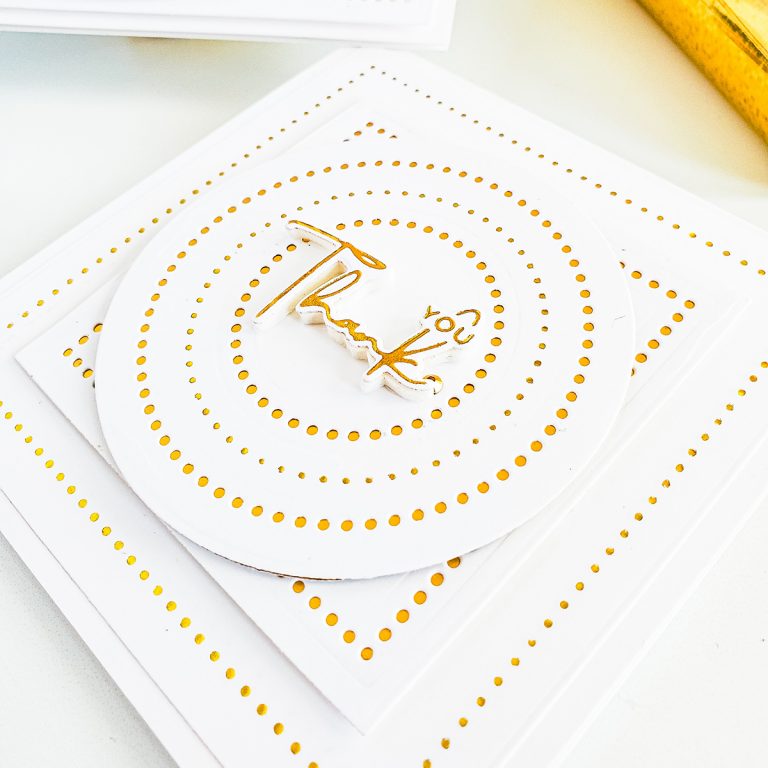 For the final layer, I lined up the third, fifth and sixth-to-last dies from the; Nestabilities Essential Circles Etched Dies to die-cut them out of white cardstock. Because, I skipped the fourth die from the set, I was able to add foil accent so, I lined up the fourth plate from the; Essential Glimmer Circles Hot Foil Plates over the circle, and I foiled it in the same way that I did for the previous examples. Finally, I repeated the same thing as I did for the second square layer by adding a circle die-cutting that I created out of gold cardstock. To finish the card off, I foam mounted the detailed foiled circle to the card as well as the Thank you from Yana’s Sentiments Glimmer Hot Foil Plate & Die Set which, I had previously foiled and die-cut it out of white cardstock. Having the card finished, I hope you can see the elegant difference between Stamping Foiling with the Glimmer Hot Foil System and adding gold accents with gold cardstock to your die-cutting projects. 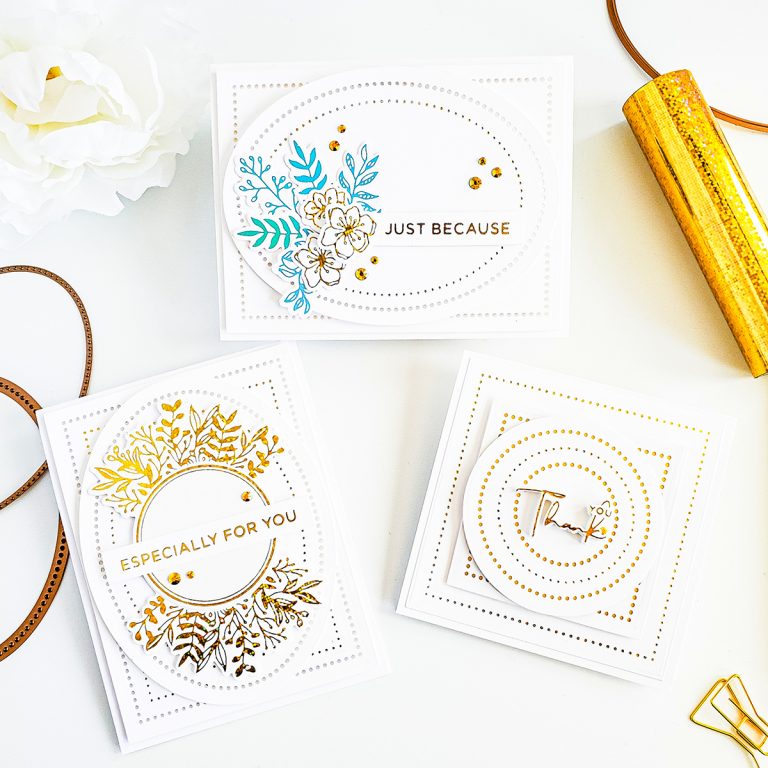 I hope that you’ve enjoyed learning about how, I’ve created these cards! featuring the new; Modern Essentials Collection Be sure to tag us in your social medias using the hashtags #Spellbinders #NeverStopMaking #GlimmerHotFoilSystem when sharing your creations so, we can see what you are creating with this beautiful collection. With that being said, thank you so much for stopping by, we hope to see you soon.

Have a fabulous crafty day! 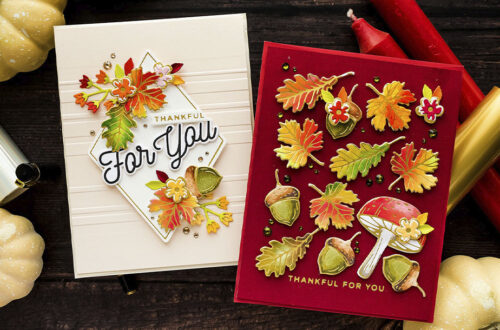 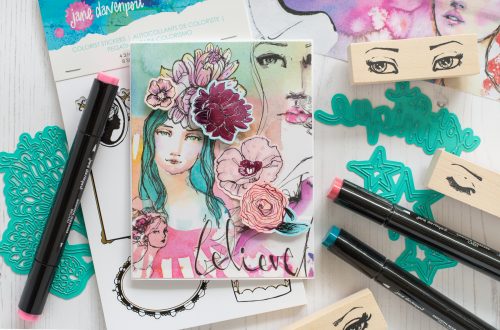 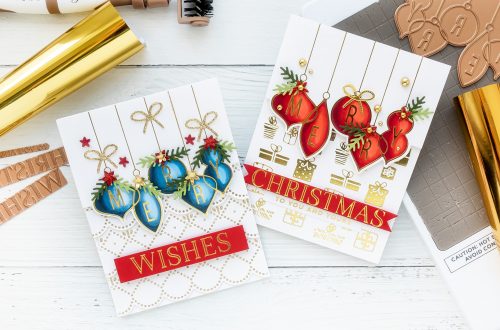 🎉The Black Friday Sale you have been waiting ...

Happy Thanksgiving🙏 We are so thankful for you ...

Peep👀 our blog for tons of inspiration💡 on ...

November's Large Die of the Month Club is ...