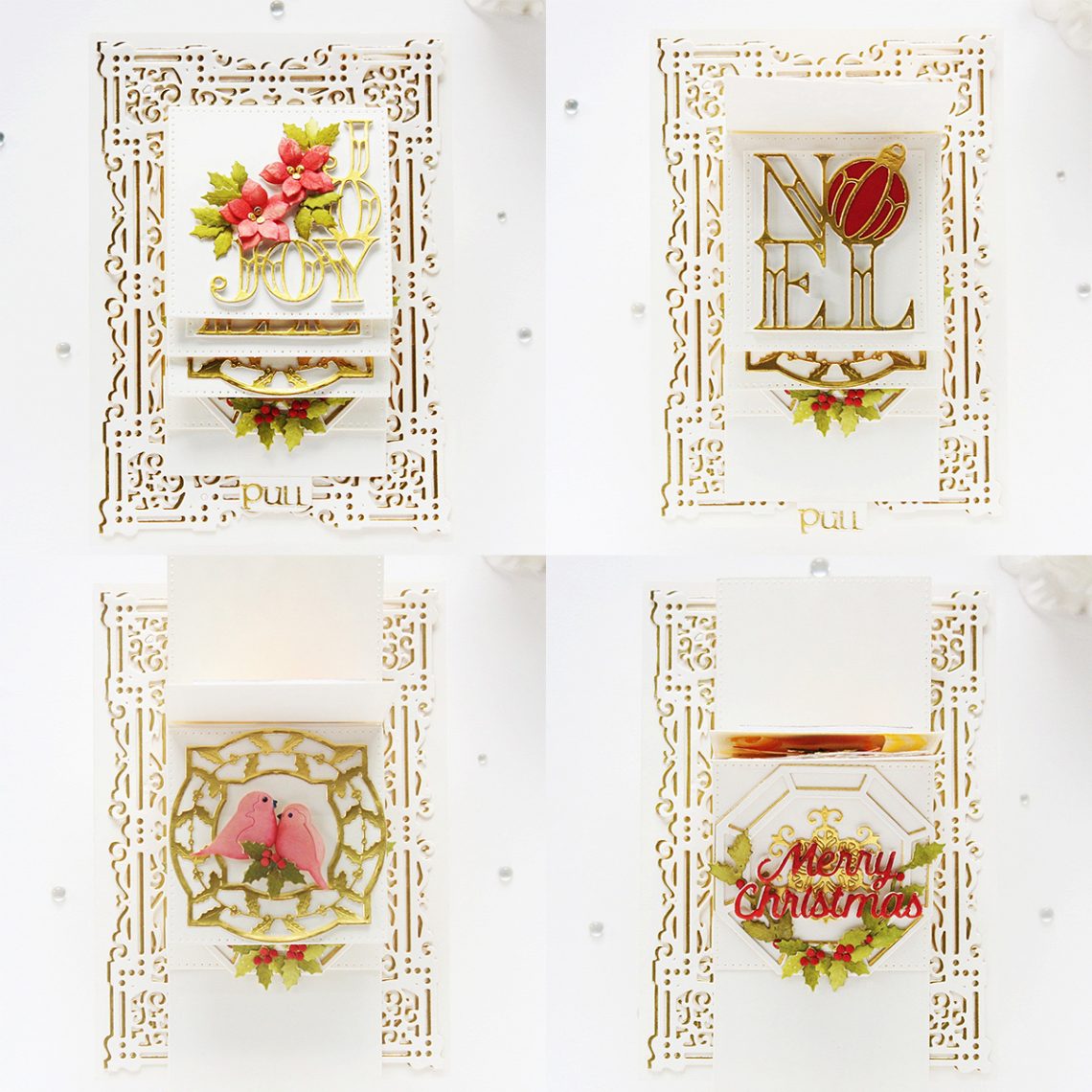 Hello, crafty friends! This is Hussena, from Quill and Punch Works, and I’m so excited and honoured to be guesting on the Spellbinders blog today, sharing two card projects I created using the exquisite Christmas Cascade Collection by Becca Feeken. This collection is so versatile and I love that there’s an interactive card die included in it to help create some beautiful, one-of-a-kind projects! 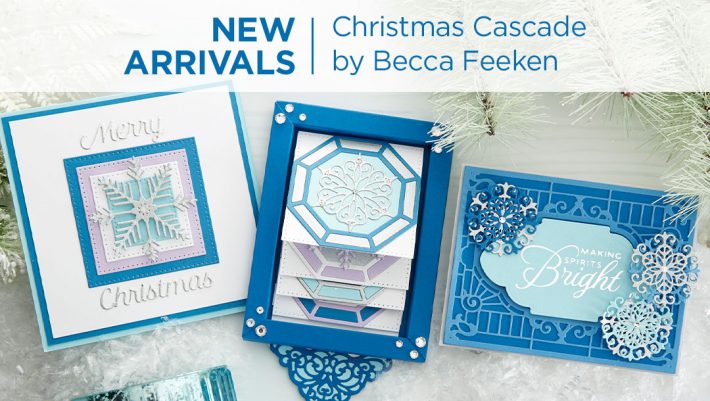 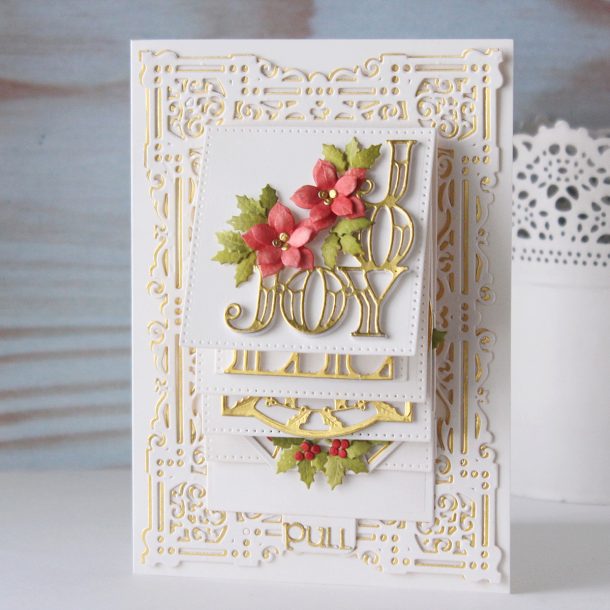 
I die cut the main base and the rest of the decorative squares from Buttercream Cardstock and adhered them using White Liner Tape. The die set is really well-thought-out and I love how there are different coordinating elements included in the collection to help you accentuate your design. 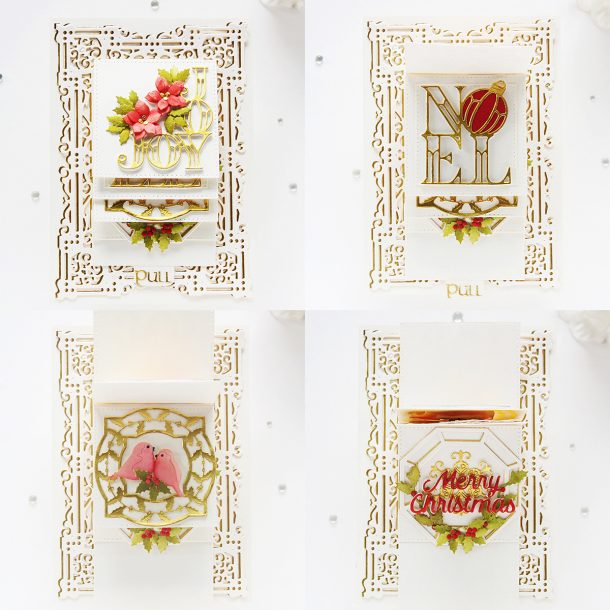 Once I created the basic framework for my card, I started working on the various embellishments for the card layers. For the first layer, I die cut the word ‘Joy’ from the Holiday Word Blocks Etched Dies from Brush Gold Cardstock. I also die cut it from white craft foam and adhered it to my panel for dimension. The poinsettias and leaves were die cut using the dies from the Holly Frame Gala Die Set. I die cut them from Whip Cream Cardstock and coloured them with Candy Apple and Lemongrass True Color Fusion inks. I added some berries die cut from Brush Gold Cardstock for the centres. 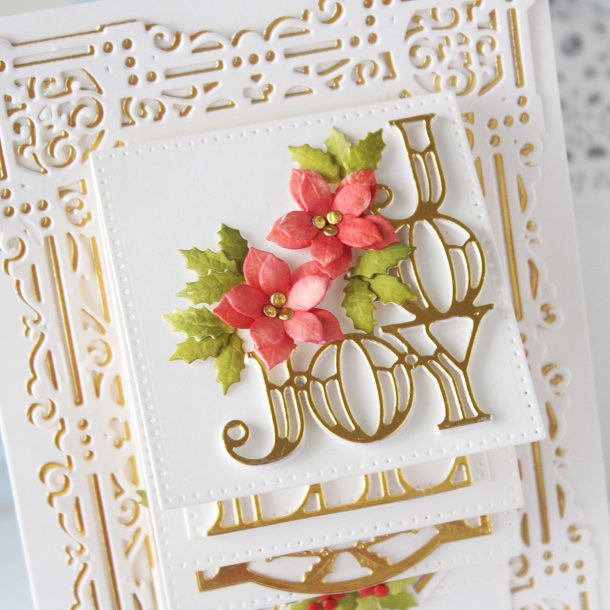 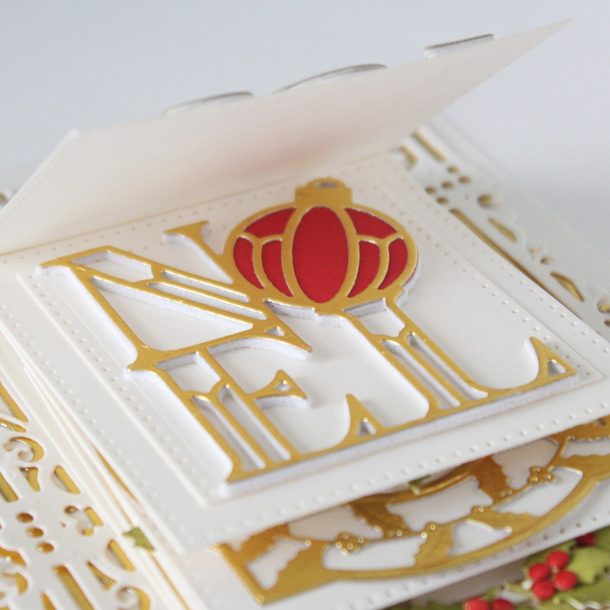 Then, for my third, layer, I decided to use a decorative frame die from the Holly Frame Gala Die Set. I die cut the frame from Brush Gold Cardstock and adhered it down using Craft Glue. The birds were die cut from Whip Cream Cardstock and coloured using the Candy Apple True Colour Fusion ink. I also added some holly leaves and berries for added interest. They were die cut using the dies from the same set and I adhered them using foam dots for dimension. 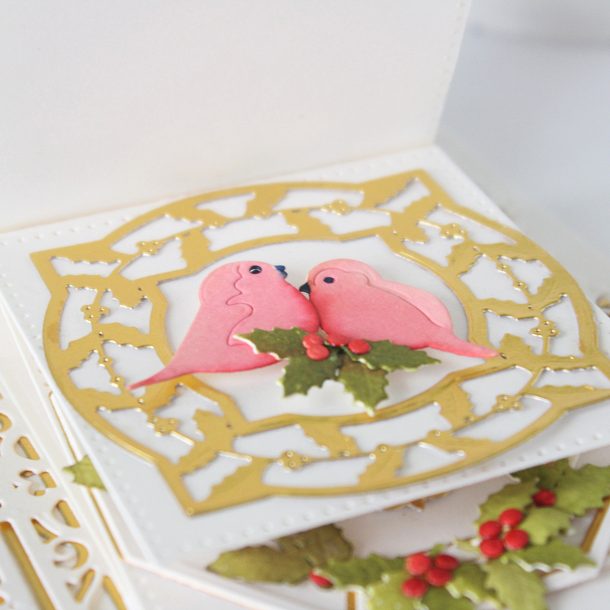 Finally, for the last year, I die cut the octagonal frame, snowflake, and the sentiment piece using the dies from the Snowflake Splendor Die Set. I die cut the frame from Whip Cream Cardstock and Brush Gold Cardstock, and adhered them down using Craft Glue, while the snowflake was die cut from Brush Gold Cardstock. The sentiment was die cut from Whip Cream Cardstock and later coloured using the Candy Apple True Colour Fusion ink. I also die cut it from white craft foam to add dimension to it. Then, I adhered a couple of holly leaves and red berries to add some interest to the design. They were die cut from the dies included in the Holly Frame Gala Die Set. 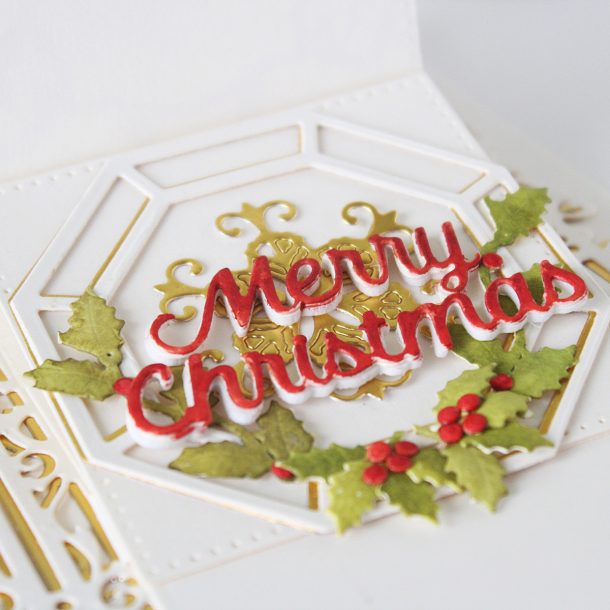 I adhered my Cascading Card to a decorative card panel which was die cut using a die from one of the past Amazing Paper Grace Die of the Month sets, called Nostalgic Serenade Card Frame Die Set. It is s really regal and beautiful frame and worked perfectly with my cascade design. I die cut it from Whip Cream Cardstock and Brush Gold Cardstock, and off-set them a little while adhering for added interest. Then, I mounted my panel to a side folding 5″ X 7″ card base. 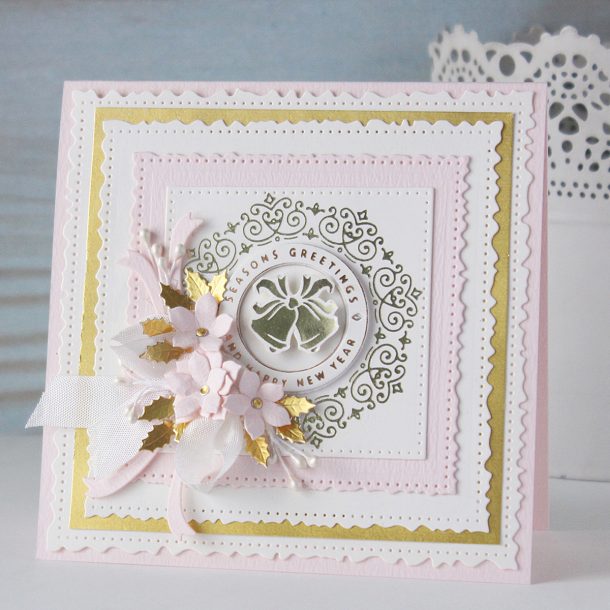 For this card, I decided to use pastel tones in order to offer some variation from my previous Card. I started by die cutting a decorative square frame piece using one of the dies from the Christmas Cascade Card Base Die Set from Buttercream Cardstock. Next, using my Glimmer System, I hot foiled the gorgeous wreath from the Filigree Glimmer Wreaths Hot Foil Plates Set on the square piece using Glimmer Hot Foil Roll – Gold. 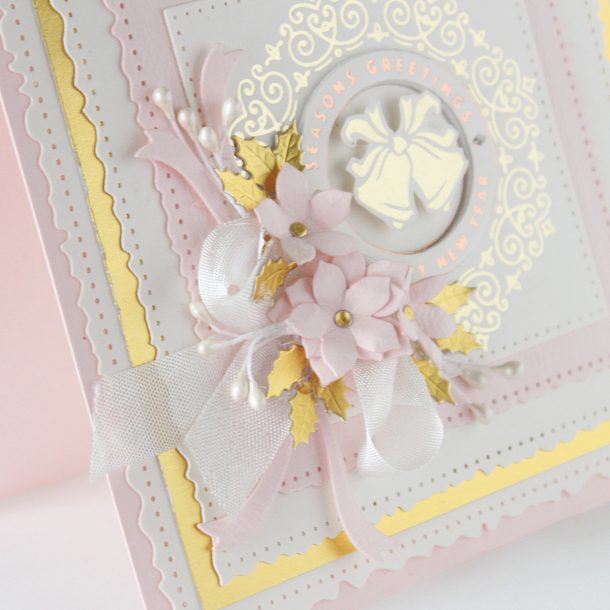 Then, I hot foiled the sentiment for my card using one of the sentiment glimmer plates again from the Glimmer Wreaths Hot Foil Plates Set. This time I used the Glimmer Hot Foil Roll in Rose Gold to create some contrast in colours. I then die cut this frame and kept it aside.

Next, I decided to foil some bells to put inside the circle frame. I hot foiled it using my Glimmer System and the Glimmer Hot Foil Roll – Gold and then fussy-cut it out. To embellish my card, I decided to create a small floral spray. I die cut the flowers and leaves from Baby Pink Textured Cardstock and Brush Gold Cardstock. I embossed the flowers using the Ball Tool stylus from the Stylus Tips for Tool n’ One and arranged them around the foiled wreath. I also die cut some ribbon ends from the Holly Frame Gala Die Set to use as swirls for my spray. Then, I tucked in some bits of seam binding ribbon and pollens for added interest. 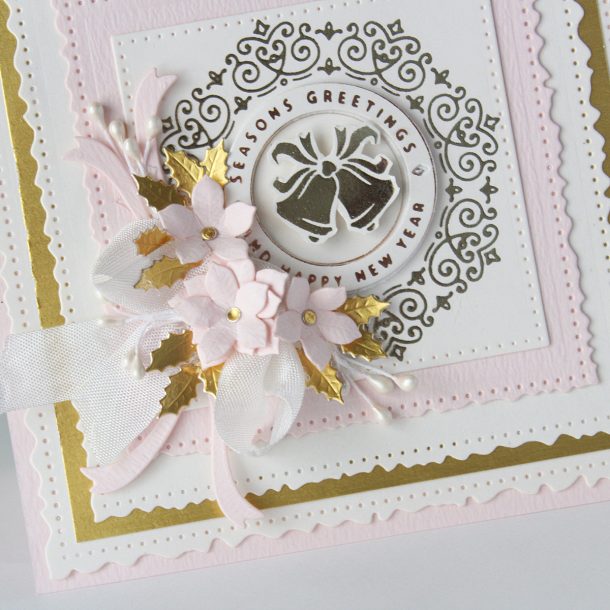 Once my card panel was ready, I adhered it down to another card panel which was die cut from the Vintage Stitched Squares Etched Dies. I just looked up the Spellbinders website and, unfortunately, this die set is no longer available, however, you can use something similar from your stash for your projects. I die cut three layers using three different dies from Baby Pink Textured Cardstock and Whip Cream Cardstock and used a plain mat layer of Brush Gold Cardstock in between to add some interest to the design. I then adhered these down to my card base which was created again from Baby Pink Textured Cardstock, measuring 5.5″ X 5.5″. I like how this card came together!

Thank you so much for letting me help inspire you today! I hope you liked my creations! If you did, please let me know which card is your favourite and why! To see more of my work with Spellbinders products, do visit my Instagram page and subscribe to my Blog. Stay safe and have a wonderful day. 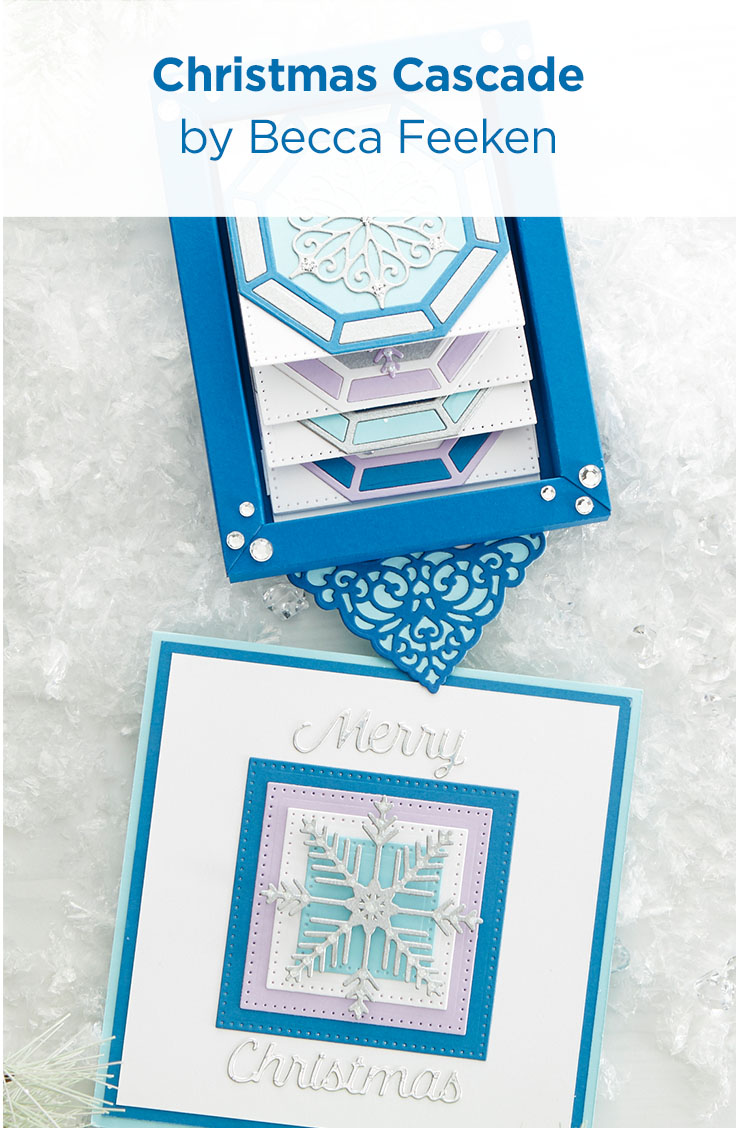 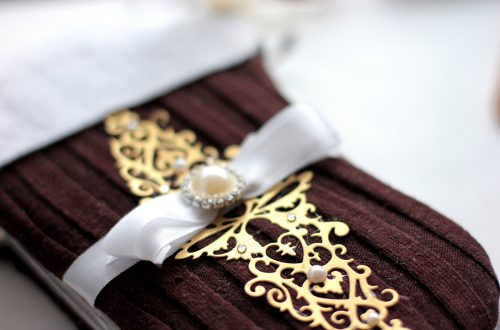 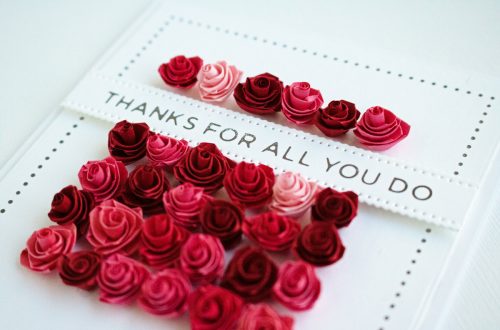 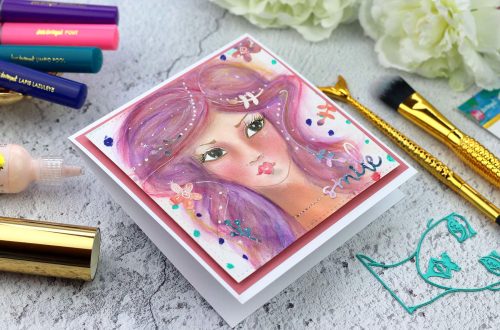 We ❤️ Marie's @marienicole_h take on our Novem

We are so pleased to announce the winners of the C

Did you know we added a new Club membership this m

Creating holiday cards has never been easier! Our