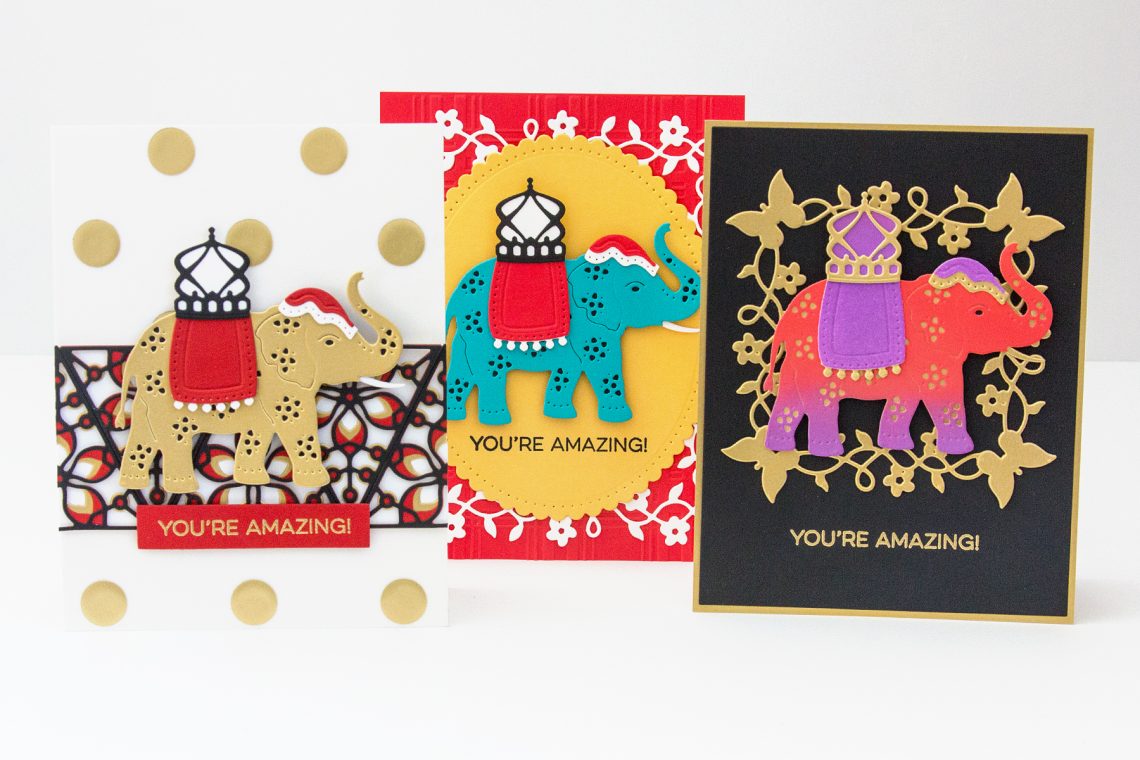 Hello! I’m Jean Manis, a papercrafter blogging at Right as Rain. I am delighted to be on the blog today sharing projects created with supplies from the November Die D-Lites release. On all three cards, the focal point is the Elephant Festival set. One of my favorite things to do as a designer is to explore the different ways in which the same image can be portrayed. On the cards I’m showing today, I’ve varied the color schemes and added elements from other sets in the November Die D-Lites release; I’ve also introduced gold on two of the cards and added texture with a dry-embossed background on one. 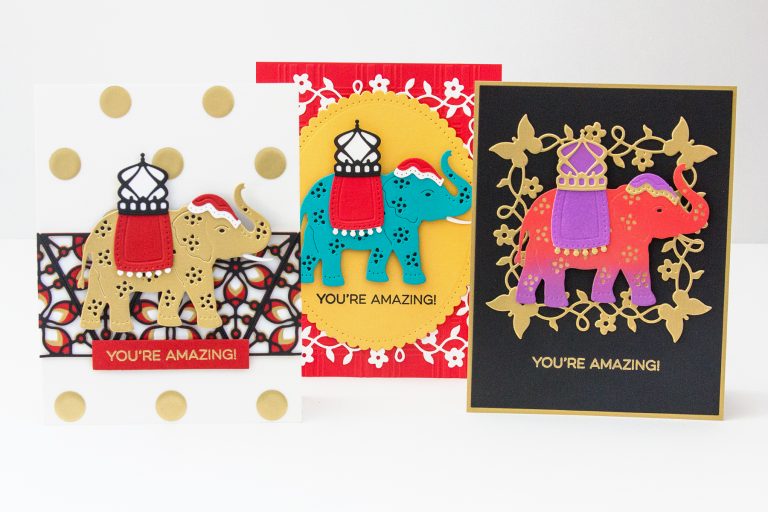 On the first card, I’ve used a variation of the primary color scheme combined with white and black. 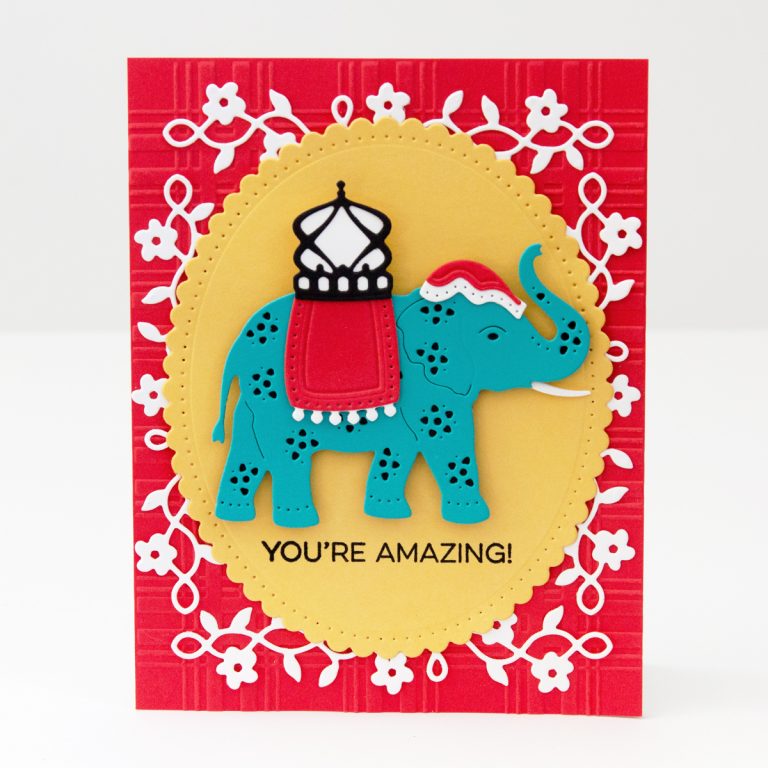 I heat-embossed the sentiment on to an oval cut with the largest die in the Fancy Edged Ovals set.

I cut the elephant from teal cardstock. Using the negative of the die-cut, I traced the shape on to Black Licorice cardstock and fussy-cut it. 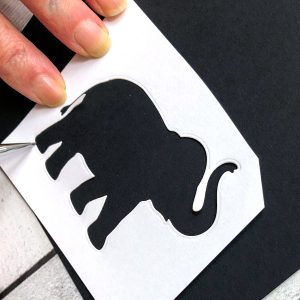 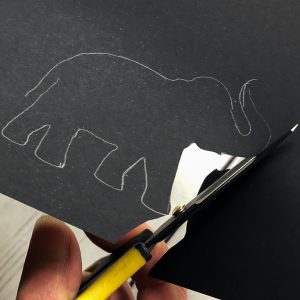 For embellishment, I added pieces of the Butterfly Frame-A-Long set cut from Whip Cream cardstock to the back of the oval. 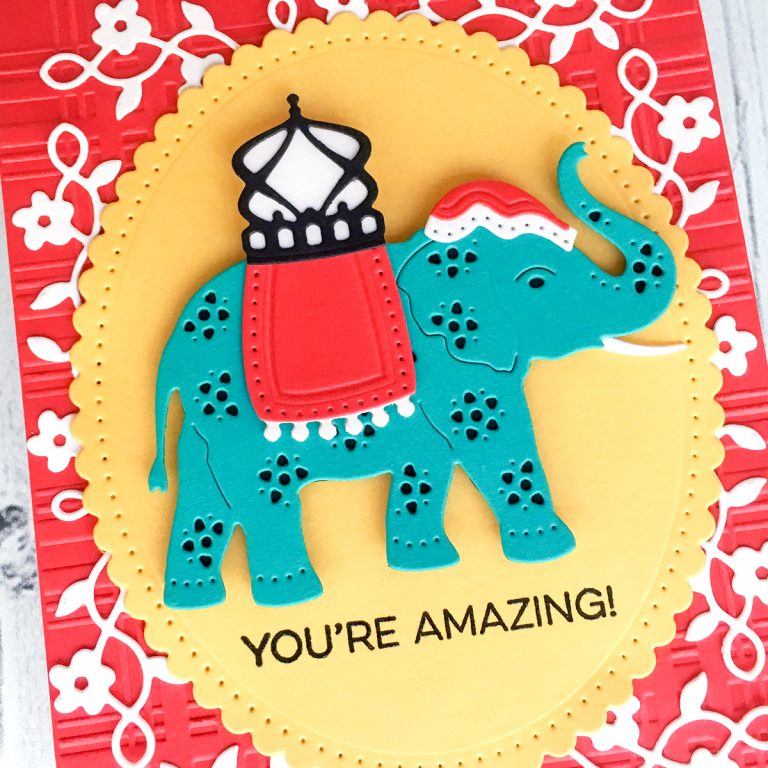 To add texture, the card base was dry-embossed with the Pretty Plaid embossing folder.

On the second card, I cut the elephant and accessories from cardstock colored with Distress Oxide ink in shades of red and purple. I fussy-cut the shape of the elephant, as I did on the first card, from Brush Gold cardstock, adhering the piece to the back of the die-cut elephant (adding black cardstock for the eye). I backed the saddle carriage as I did on the first card. I cut the remaining pieces in the set and assembled the elephant. 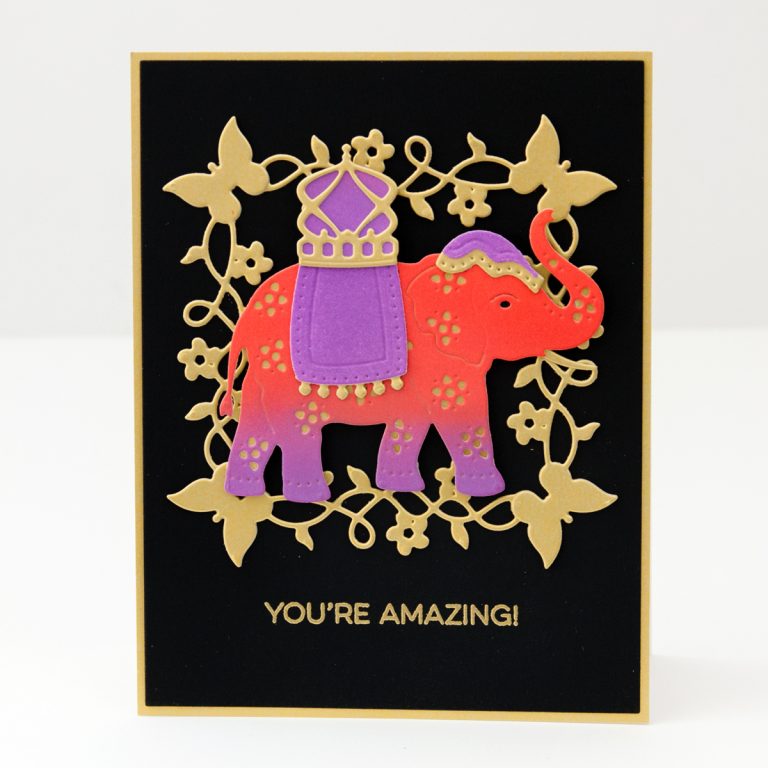 In order to keep the focus on the elephant’s bright colors, I used gold and black for the card background.
I cut pieces using a die in the Butterfly Frame-A-Long set from Brush Gold cardstock and adhered the pieces together at the corners to create a frame. 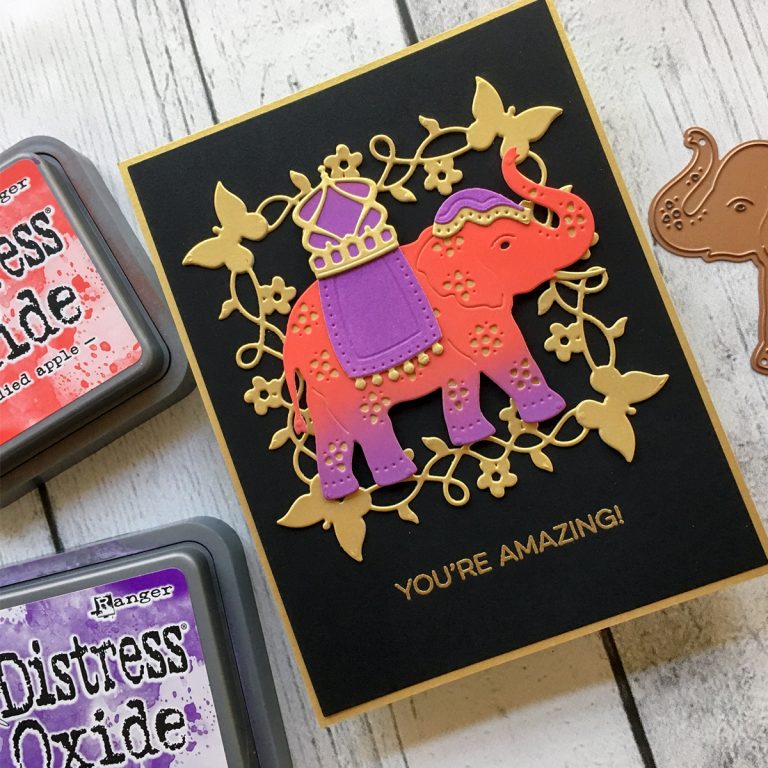 The sentiment was heat-embossed on to a Black Licorice cardstock panel, which was cut with a die in the A-2 Matting Basics A die set. I wanted a thin reveal of the Brush Gold cardstock base.

On the third card, I began my design with the border created with the Kaleidoscope Triangles set. 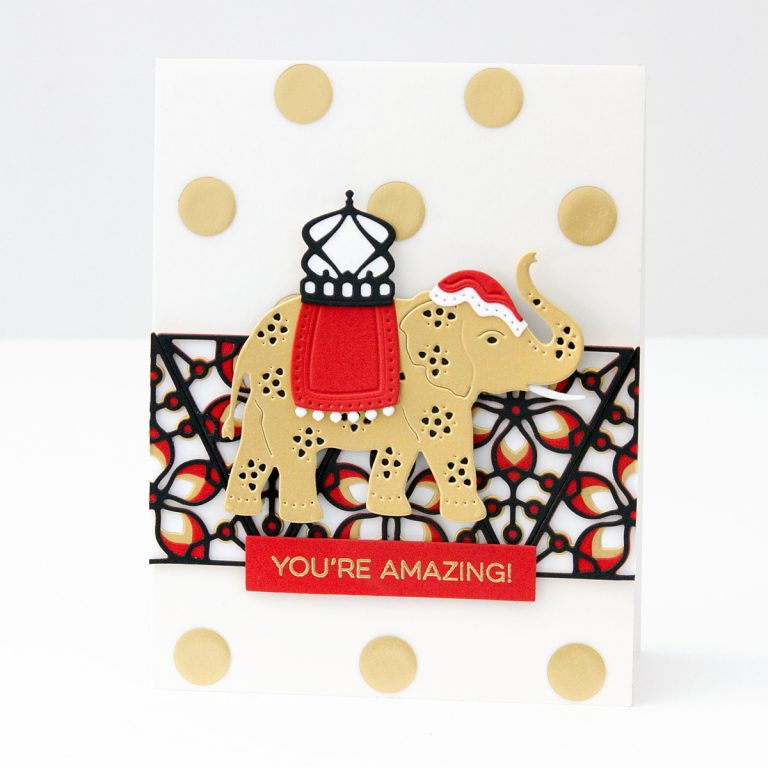 I often turn to a metallic for one of the die-cut pieces when I use the Spellbinders stacking die sets. I cut the top triangle from Black Licorice cardstock, the center triangle from red cardstock, and the bottom triangle from Brush Gold cardstock. After adhering the pieces together to form the triangles, I adhered five triangles to a Whip Cream cardstock strip, cut 4 ¼” wide by 2” tall. I trimmed the triangles on the left and right to fit the width.
Wanting the elephant to coordinate with the border, I die-cut the pieces from the same cardstock colors. I fussy-cut Black Licorice cardstock in the shape of the elephant, as on the other cards, and added the piece to the back of the elephant, which I had cut from Brush Gold cardstock. I backed the saddle carriage as well. I assembled the elephant. 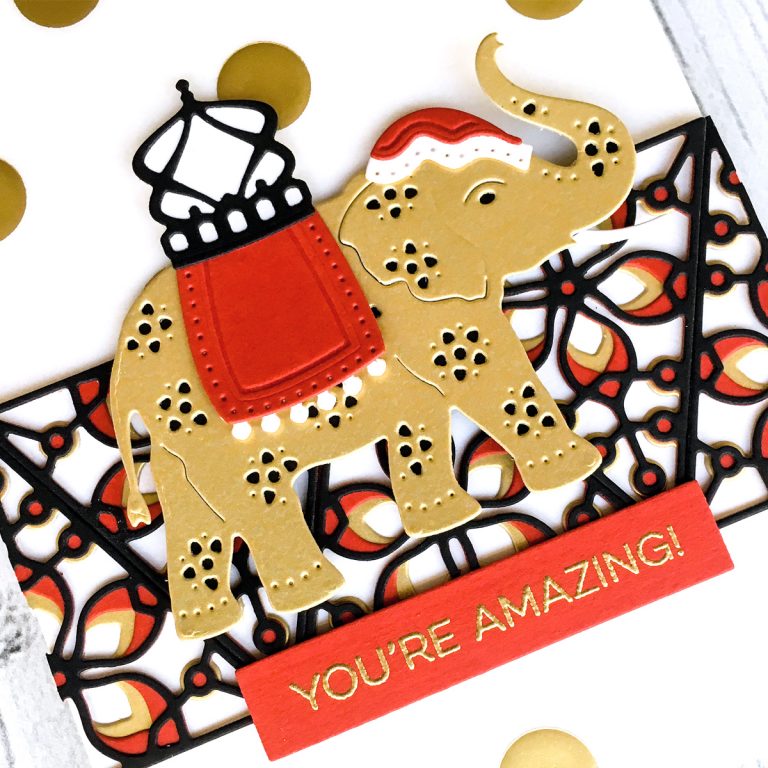 The card base was created by adhering gold-dot vellum paper to Whip Cream cardstock. I added the assembled Kaleidoscope Triangles strip, the heat-embossed sentiment (which was cut with the A-2 Matting Basics B die set), and the elephant.

Bazzill Wax Lips cardstock; gold-dot vellum paper; sheet adhesive; Nuvo craft glue; foam adhesive; My Favorite Things Yay for You stamp set
There are many directions that your design can take with the products in the November Die D-Lites release. Thanks for stopping by! 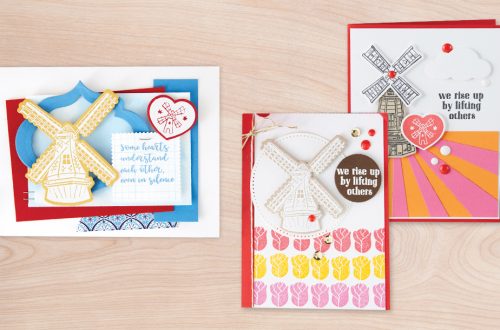 March 2019 Stamp of the Month is Here – Good Places 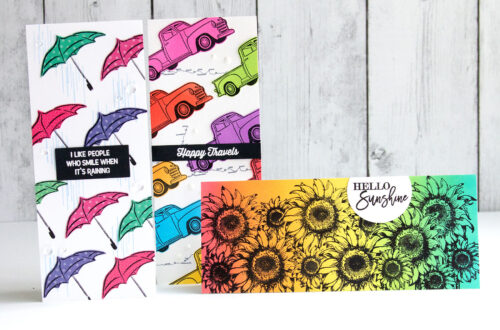 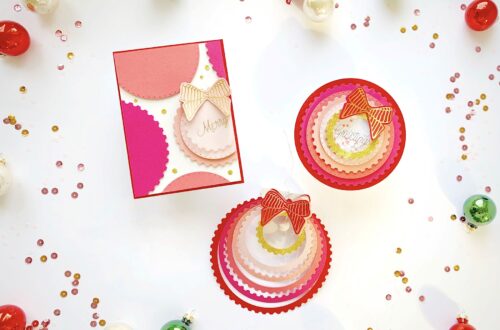 Make your heart glimmer💖 with the December ...